Hara chicken dum biryani is yet another tempting Biryani recipe. I have tried this recipe for the first time and it turned out really amazing. The main ingredient which makes this recipe so special is Hara masala. Hara masala is prepared with fresh mint leaves, coriander leaves, coconut powder, green chilies and blanched almonds. Chicken pieces are marinated with the Hara masala for an hour. For this recipe, chicken and rice are cooked simultaneously in different vessels until they are half done. later they are cooked together with half boiled rice layered on top of the half cooked chicken.

the outcome of the recipe depends on how you prepare the marinade. taste the marinade after mixing and adjust the spices according to your taste. I have used chicken joints for the recipe, but you can use normal biryani cut pieces.it tastes good without any accompaniment.but can be served with Mirchi ka salan and raita. 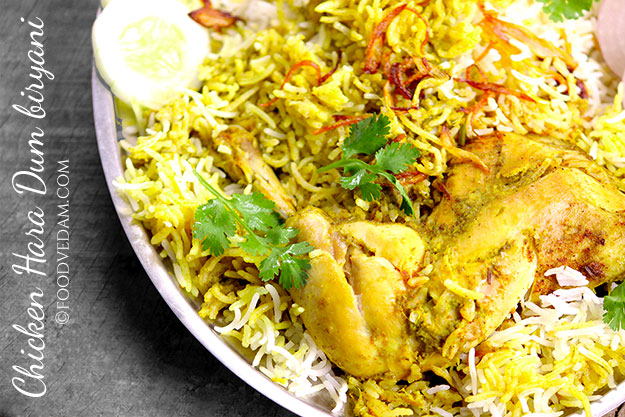