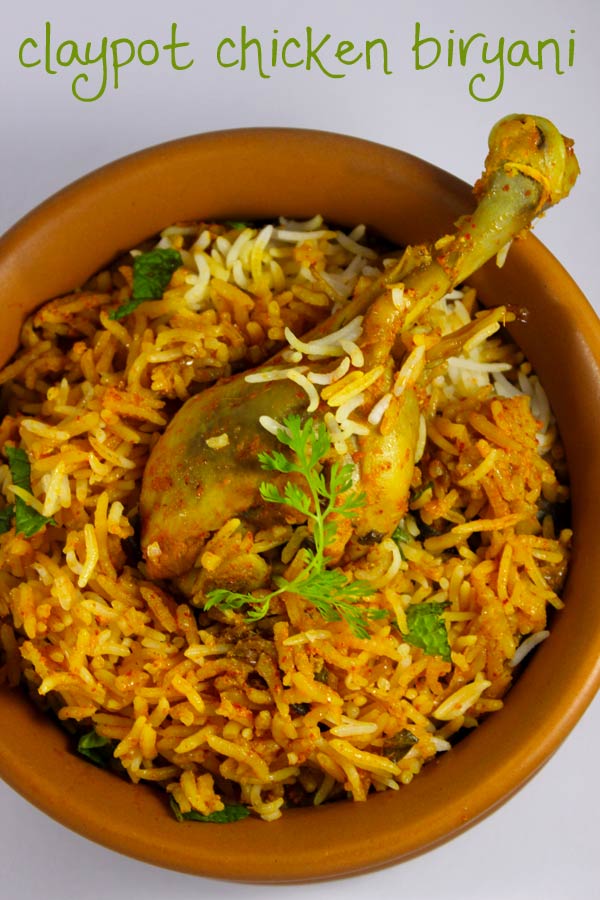 Biryani is my favorite recipe. in fact, it’s everyone’s favorite.I heard many times about Chicken Pot biryani and even I saw the pots over the counters in some Restaurants in Hyderabad.On one fine day, we decided to have that biryani.we ate that, but I didn’t find any difference between normal biryani and the pot biryani that we had.I finally recognized that they didn’t cook that biryani in the pot directly(not in all Restaurants).They cooked in the normal vessel and transferred it to the clay pot.But that was not what I want.

So I made this recipe on my own.when I was a child my grandma used to serve breakfast in banana leaf or Badam leaf which was grown in our backyard.I have no words to explain that taste. imagine very hot idlis, dosa, upma(cooked with ghee) served in Banana leaf.I like the flavor of banana leaf.That is why I covered the rice with those leaves so the rice could absorb the flavor.I never saw using coconut milk in authentic Hyderabadi biryani. So I gave it a light Andhra touch-added coconut milk.

It looks like a normal Biryani.but the flavor of clay and banana leaf makes the dish so special.This is a must eat recipe before you die.Hope you will try and enjoy the recipe and don’t forget to leave your valuable feedback in the comment section below.

Chicken pot biryani recipe-Murgh Matka biryani
Recipe Type: Non-veg Rice recipe
Cuisine: Hyderabadi
Author: BINDU
Prep time: 1 hour
Cook time: 30 mins
Total time: 1 hour 30 mins
Serves: 2-3
chicken pot biryani is dum style biryani cooked in the clay pot covered with banana leaves.It is very tasty and a must try recipe.
Ingredients
Instructions
MARINATION PROCESS
SOAKING RICE
COOKING RICE
ASSEMBLING AND COOKING BIRYANI
Serving
Notes
1.you need to fill the clay pot with full of water for one whole day before you use it.[br]2.if the capacity of the pot is 2 liters, then you can cook 1 kg quantity in it.[br]3.you may reduce or increase the spices according to your taste.but the quantities which have used were perfect.[br]4.here in this recipe I didn’t grind any spices, I used whole spices.[br]5.yogurt that you use for marination must be semi-thick because the clay pot absorbs more moisture, unlike the normal utensil.
3.5.3208 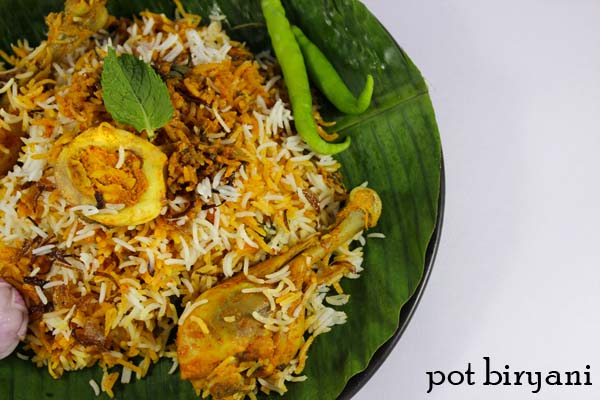